Zhuge Liang (181–234) , social name Kong Ming, born in Langya Yangdu (Now Yinan county, Linyi city of Shandong), was a chancellor of the state of Shu Han during the Three Kingdoms period of Chinese history. He is often recognised as the greatest and most accomplished strategist of his era. He was appointed Wu Xiang Vassal when he alive. Posthumous title is "Zhong Wu (honest and loyal) Vassal" after death.

His reputation as an intelligent and learned scholar grew even while he was living in relative seclusion, earning him the nickname "Wolong" (臥龍; literally: "Crouching Dragon"). His representative books are Chu Shi Biao, written prior to the Northern Expeditions, provided a salutary reflection of his unwavering loyalty to the state of Shu, which moved the readers to tears. And also Jie Zi Shu and so on. Zhuge Liang was not only an important military strategist and statesman; he was also an accomplished scholar and inventor. He created Kong Ming lantern and the handcart (ancient transport vehicle) and so on. Zhuge Liang is also the subject of many Chinese literary works. A poem by Du Fu was written in memory of Zhuge Liang whose legacy of unwavering dedication. In Chengdu, People also built Wu Hou Memorial Hall in memory of Zhuge Liang.

Guan Yu (about 160-220), also known with the templar names of Guandi (short for his title "Saintly Emperor Guan")and Guan Gong (Lord Guan), born in Xie County, Hedong (present day Yuncheng (运城市), Shanxi). He was a general serving under the warlord Liu Bei during the late Eastern Han Dynasty of China whom was trusted most by Liu Bei. In his nearly 60 years life, he helped Liu Bei collapse of the Han Dynasty and the establishment of the state of Shu Han during the Three Kingdoms period.

After his death, Guan was deified as ""Guan Gong" and worshipped by the folks. Because of his saga, deeds and morals, he was respected as an epitome of loyalty, reliance, righteousness and courage by later generation. Among Chinese ancient endless celebrity, there are only 2 are respected as "saint", there are our "Literature Saint" Confucius and "Military Saint (Wu Sheng)" Guan Yu. 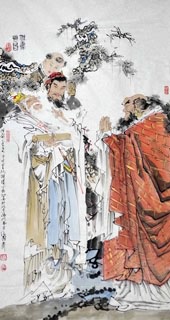 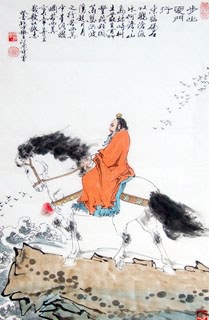 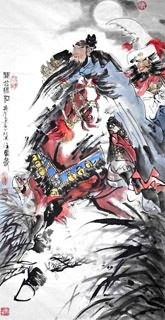