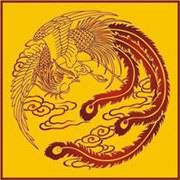 The Chinese phoenix, which called "Feng Huang" in China, is splendid and exists only in legends or fairy tales. Fenghuang is the compound word that is referred to two birds: the male bird called Feng and Huang is female. But when paired with the Dragon which represent the male, then Fenghuang is female. In traditional Chinese culture, the Dragon standed for the emperor, and phoenix was endowed with a similar meaning to empresses.

In primitive times, the legendary phoenix was the God of protection and the chief of all the birds . Its head was like that of a golden pheasant, and its body was like that of a mandarin duck. It had the beak of a parrot, the wings of a roc, the legs of a crane, and the feathers of a peacock. Its feathers include five colors: red, yellow, cyan, white and black.

In modern explanations of Chinese symbolism, Fenghuang is a symbol of auspiciousness, nobility, and peace. It also symbolize the "Fire" (huo 火) for its red feather according to the theory of Yin-Yang and Five elements.

Chinese Phoenix Painting: As a unearthly bird, Fenghuang objectify the five virtues of mercy, justice, wisdom, integrity and propriety. It is noble and unsulied, drinking and eating nothig but the morning dew and the burgeon of bamboo, and perching only in the millenarian firmiana tree. Therefore, any report that mention someone saw a dragon or a phoenix was recognized as an extraordinary auspicious sign, and said that it betoken a booming period for the country. Just like the Chinese saying, "People will enjoy happiness for a long time while the dragon soaring and the phoenix dancing in the sky. It also brings peace to all under heaven."

One Hundred (100) Birds Paying Homage to Phoenix Chinese Painting: (bai niao chao feng tu 百鸟朝凤图). The painting of all birds paying homage to the phoenix, hasing the symbolic significance of leading, which is suitable to hang in manager office of corporation or factory. In the meantime, it's also suitable for kindergardens, restaurants, hotels, department stores, rest homes(it can strengthen vitality and health of the aged ) and parlour.

Chinese Peony & Phoenix Fengshui Painting: give good luck to perfect and happy marrige, and being riches and honour. 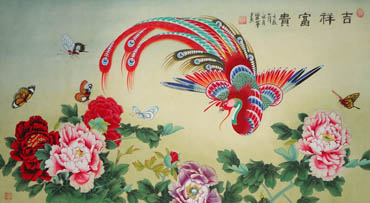 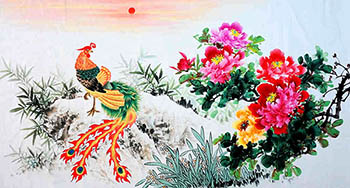 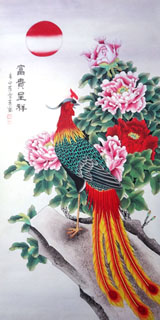 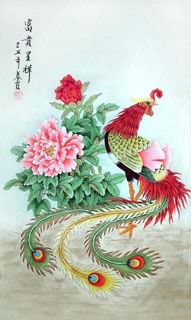 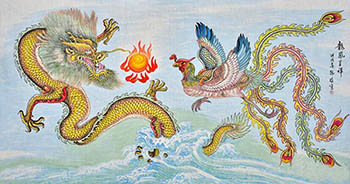 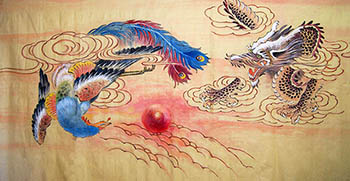 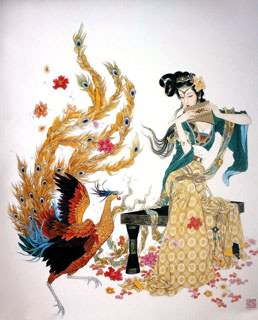 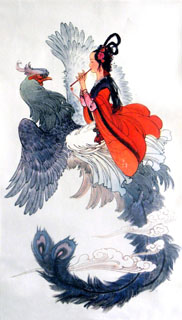 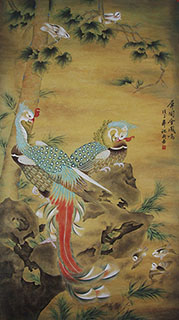 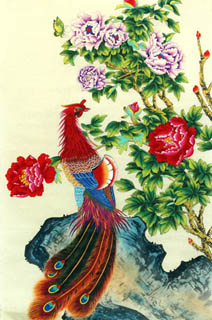 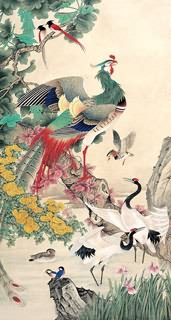 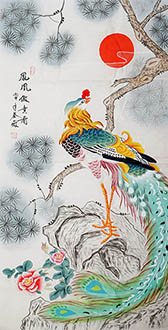 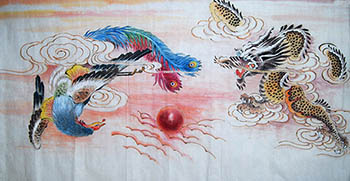 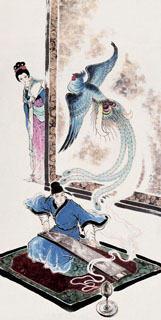